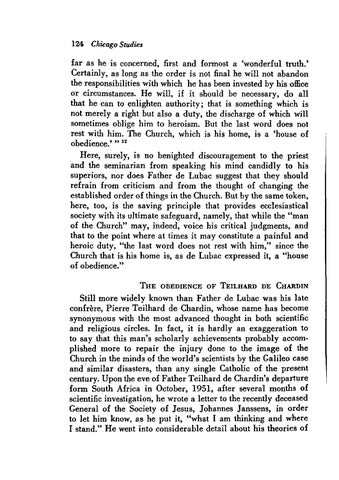 far as he is concerned, first and fonnost a &#39;wonderful truth.&#39; Certainly, as long as the order is not final he will not abandon the responsibilities with which he has been invested by his office or circumstances. He will, if it should be necessary, do all that he can to enlighten authority; that is something which is not merely a right but also a duty, the discharge of which will sometimes oblige him to heroism. But the last word does not rest with him. The Church, which is his home, is a &#39;house of obedience.&#39;&quot; 12 Here, surely, is no benighted discouragement to the priest and the seminarian from speaking his mind candidly to his superiors, nor does Father de Lubac suggest that they should refrain from criticism and from the thought of changing the established order of things in the Church. But by the same token, here, too, is the saving principle that provides ecclesiastical society with its ultimate safeguard, namely, that while the &quot;man of the Church&quot; may, indeed; voice his critical judgments, and that to the point where at times it may constitute a painful and heroic duty, &quot;the last word does not rest with him,&quot; since the Church that is his home is, as de Lubac expressed it, a &quot;house of obedience.&quot; THE OBEDIENCE OF TEILHARD DE CHARDIN

Still more widely known than Father de Lubac was his late confrere, Pierre Teilhard de Chardin, whose name has become synonymous with the most advanced thought in both scientific and religious circles. In fact, it is hardly an exaggeration to to say that this man&#39;s scholarly achievements probably accomÂˇ plished more to repair the injury done to the image of the Church in the minds of the world&#39;s scientists by the Galileo case andÂˇ similar disasters, than any single Catholic of the present century. Upon the eve of Father Teilhard de Chardin&#39;s departure form South Africa in October, 1951, after several months of scientific investigation, he wrote a letter to the recently deceased General of the Society of Jesus, Johannes Janssens, in order to let him know, as he put it, &quot;what I am thinking and where I stand.&#39;&#39;. He went into considerable detail about his theories of