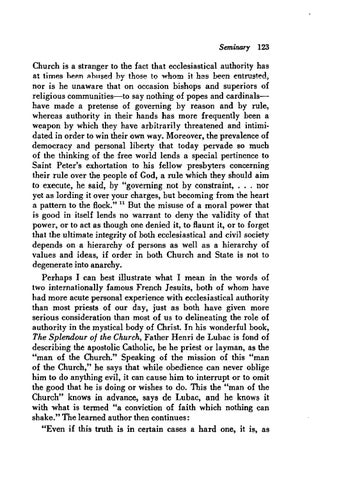 Church is a stranger to the fact that ecclesiastical authority has at times heen R hnsed by those to whom it has been entrusted; nor is he unaware that on occasion bishops and superiors of religious communities-to say nothing of popes and cardinalshave made a pretense of governing by reason and by rule, whereas authority in their hands has more frequently been a weapon by which they have arbitrarily threatened and intimidated in order to win their own way. Moreover, the prevalence of democracy and personal liberty that today pervade so much of the thinking of the free world lends a special pertinence to Saint Peter&#39;s exhortation to his fellow presbyters concerning their rule over the people of God, a rule which they should aim to execute, he said, by &quot;governing not by constraint, ... nor yet as lording it over your charges, but becoming from the heart a pattern to the flock.&quot; 11 But the misuse of a moral power that is good in itself lends no warrant to deny the validity of that power, or to act as though one denied it, to flaunt it, or to forget that the ultimate integrity of both ecclesiastical and civil society depends on a hierarchy of persons as well as a hierarchy of values and ideas, if order in both Church and State is not to degenerate into anarchy. Perhaps I can best illustrate what I mean in the words of two internationally famous French Jesuits, both of whom have had more acute personal experience with ecclesiastical authority than most priests of our day, just as both have given more serious consideration than most of us to delineating the role of authority in the mystical body of Christ. In his wonderful book, The Splendour of the Church, Father Henri de Lubac is fond of describing the apostolic Catholic, be he priest or layman, as the &quot;man of the Church.&quot; Speaking of the mission of this &quot;man of the Church,&quot; he says that while obedience can never oblige him to do anything evil, it can cause him to interrupt or to omit the good that he is doing or wishes to do. This the &quot;man of the Church&quot; knows in advance, says de Lubac, and he knows it with what is termed &quot;a conviction of faith which nothing can shake.&quot; The learned author then continues: &quot;Even if this truth is in certain cases a hard one, it is, as