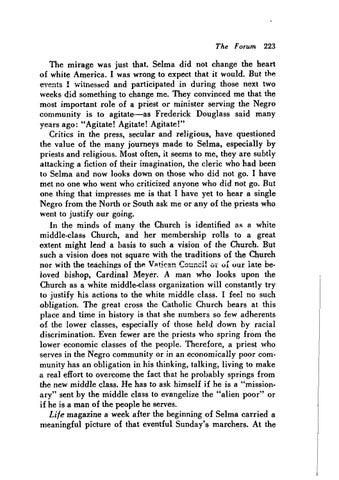 The mirage was just that. Selma did not change the heart of white America. I was wrong to expect that it would. But the events I witnes â&amp;#x20AC;˘ .,d and participated in during those next two weeks did something to change me. They convinced me that the most important role of a priest or minister serving the Negro community is to agitate--as Frederick Douglass said many years ago: &quot;Agitate! Agitate! Agitate!&quot; Critics in the press, secular and religious, have questioned the value of the many journeys made to Selma, especially by priests and religious. Most often, it seems to me, they are subtly attacking a fiction of their imagination, the cleric who had been to Selma and now looks down on those who did not go. I have met no one who went who criticized anyone who did not go. But one thing that impresses me is that I have yet to hear a single Negro from the North or South ask me or any of the priests who went to justify our going. In the minds of many the Church is identified as a white middle-class Church, and her membership rolls to a great extent might lend a basis to such a vision of the Church. But such a vision does not square with the traditions of the Church nor with the teachings of th~ VR_ti-:f!n Co!lnc:il Vi&#39; vf our iate beloved bishop, Cardinal Meyer. A man who looks upon the Church as a white middle-class organization will constantly try to justify his actions to the white middle class. I feel no such obligation. The great cross the Catholic Church bears at this place and time in history is that she numbers so few adherents of the lower classes, especially of those held down by racial discrimination. Even fewer are the priests who spring from the lower economic classes of the people. Therefore, a priest who serves in the Negro community or in an economically poor comÂˇ munity has an obligation in his thinking, talking, living to make a real effort to overcome the fact that he probably springs from the new middle class. He has to ask himself if he is a &quot;missionÂˇ ary&quot; sent by the middle class to evangelize the &quot;alien poor&quot; or if he is a man of the people he serves. Life magazine a week after the beginning of Selma carried a meaningful picture of that eventful Sunday&#39;s marchers. At the