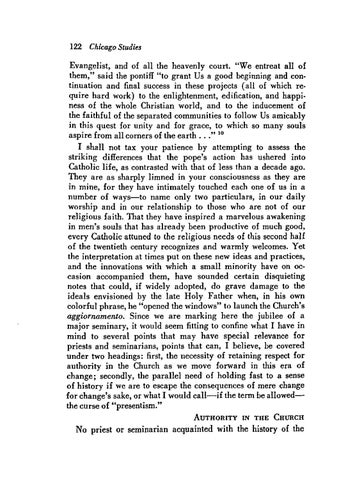 Evangelist, and of all the heavenly court. &quot;We entreat all of them,&quot; said the pontiff &quot;to grant Us a good beginning and continuation and final success in these pwjects (all of which require hard work) to the enlightenment, edification, and happiÂˇ ness of the whole Christian world, and to the inducement of the faithful of the separated communities to follow Us amicably in this quest for unity and for grace, to which so many souls aspire from all comers of the earth ... &quot; 10 I shall not tax your patience by attempting to assess the striking differences that the pope&#39;s action has ushered into Catholic life, as contrasted with that of less than a decade ago. They are as sharply limned in your consciousness as they are in mine, for they have intimately touched each one of us in a number of ways-to name only two particulars, in our daily worship and in our relationship to those who are not of our religious faith. That they have inspired a marvelous awakening in men&#39;s souls that has already been productive of much good, every Catholic attuned to the religious needs of this second half of the twentieth century recognizes and warmly welcomes. Yet the interpretation at times put on these new ideas and practices, and the innovations with which a small minority have on occasion accompanied them, have sounded certain disquieting notes that could, if widely adopted, do grave damage to the ideals envisioned by the late Holy Father when, in his own colorful phrase, he &quot;opened the windows&quot; to launch the Church&#39;s aggiornamento. Since we are marking here the jubilee of a major seminary, it would seem fitting to confine what I have in mind to several points that may have special relevance for priests and seminarians, points that can, I believe, be covered under two headings: first, the necessity of retaining respect for authority in the Church as we move forward in this era of change; secondly, the parallel need of holding fast to a sense of history if we are to escape the consequences of mere change for change&#39;s sake, or what I would call-if the term be allowedthe curse of &quot;presentism.&quot; AUTHORITY IN THE CHURCH

No priest or seminarian acquainted with the history of the