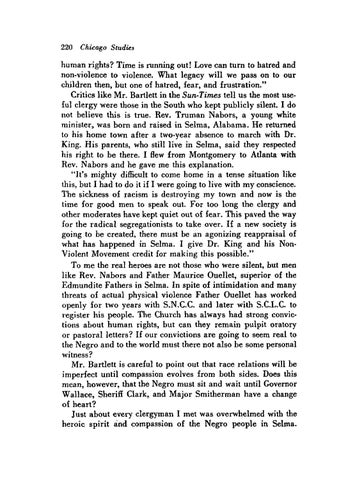 human rights? Time is running out! Love can turn to hatred and non-violence to violence. What legacy will we pass on to our children then, but one of hatred, fear, and frustration.&quot; Critics like Mr. Bartlett in the Sun-Times tell us the most useful clergy were those in the South who kept publicly silent I do not believe this is true. Rev. Truman Nabors, a young white minister, was born and raised in Selma, Alabama. He returned to his home town after a two-year absence to march with Dr. King. His parents, who still live in Selma, said they respected his right to be there. I flew from Montgomery to Atlanta with Rev. Nabors and he gave me this explanation. &quot;It&#39;s mighty difficult to come home in a tense situation like this, but I had to do it if I were going to live with my conscience. The sickness of racism is destroying my town and now is the time for good men to speak out. For too long the clergy and other moderates have kept quiet out of fear. This paved the way for the radical segregationists to take over. If a new society is going to be created, there must be an agonizing reappraisal of what has happened in Selma. I give Dr. King and his NonViolent Movement credit for making this possible.&quot; To me the real heroes are not those who were silent, but men like Rev. Nabors and Father Maurice Ouellet, superior of the Edmundite Fathers in Selma. In spite of intimidation and many threats of actual physical violence Father Ouellet has worked openly for two years with S.N.C.C. and later with S.C.L.C. to register his people. The Chumh has always had strong convictions about human rights, but can they remain pulpit oratory or pastoral letters? If our convictions are going to seem real to the Negro and to the world must there not also be some personal witness? Mr. Bartlett is careful to point out that race relations will be imperfect until compassion evolves from both sides. Does this mean, however, that the Negro must sit and wait until Governor Wallace, Sheriff Clark, and Major Smitherman have a change of heart? Just about every clergyman I met was overwhelmed with the heroic spirit and compassion of the Negro people in Selma.