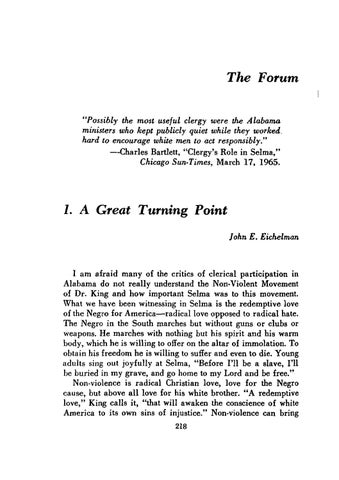 The Forum &quot;Possibly the most useful clergy were the Alabama ministers who kept publicly quiet while they worked. hard to encourage white men to act responsibly.&quot; -Charles Bartlett, &quot;Clergy&#39;s Role in Selma,&quot; Chicago Sun-Times, March 17, 1965.

I am afraid many of the critics of clerical participation in Alabama do not really understand the Non-Violent Movement of Dr. King and how important Selma was to this movement. What we have been witnessing in Selma is the redemptive love of the Negro for America-radical love opposed to radical hate. The Negro in the South marches but without guns or clubs or weapons. He marches with nothing but his spirit and his warm body, which he is willing to offer on the altar of immolation. To obtain his freedom he is willing to suffer and even to die. Young adults sing out joyfully at Selma, &quot;Before I&#39;ll be a slave, I&#39;ll be buried in my grave, and go home to my Lord and be free.&quot; Non-violence is radical Christian love, love for the Negro cause, but above all love for his white brother. &quot;A redemptive love,&quot; King calls it, &quot;that will awaken the conscience of white America to its own sins of injustice.&quot; Non-violence can bring 218