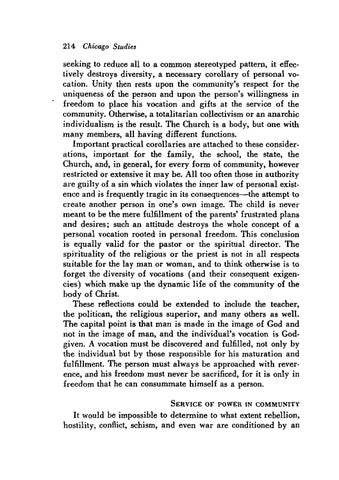 seeking to reduce all to a common stereotyped pattern, it effectively destroys diversity, a necessary corollary of personal vocation. Unity then rests upon the community&#39;s respect for the uniqueness of the person and upon the person&#39;s willingness in freedom to place his vocation and gifts at the service of the community. Otherwise, a totalitarian collectivism or an anarchic individualism is the result. The Church is a body, but one with many members, all having different functions. Important practical corollaries are attached to these considerÂˇ ations, important for the family, the school, the state, the Church, and, in general, for every form of community, however restricted or extensive it may be. All too often those in authority are guilty of a sin which violates the inner law of personal existence and is frequently tragic in its consequences-the attempt to create another person in one&#39;s own image. The child is never meant to be the mere fulfillment of the parents&#39; frustrated plans and desires; such an attitude destroys the whole concept of a personal vocation rooted in personal freedom. This conclusion is equally valid for the pastor or the spiritual director. The spirituality of the religious or the priest is not in all respects suitable for the lay man or woman, and to think otherwise is to forget the diversity of vocations (and their consequent exigencies) which make up the dynamic life of the community of the body of Christ. These reflections could be extended to include the teacher, the politican, the religious superior, and many others as well. The capital point is that man is made in the image of God and not in the image of man, and the individual&#39;s vocation is Godgiven. A vocation must be discovered and fulfilled, not only by the individual but by those responsible for his maturation and fulfillment. The person must always be approached with reverÂˇ ence, and his freedom must never be sacrificed, for it is only in freedom that he can consummate himself as a person. SERVICE OF POWER IN COMMUNITY

It would be impossible to determine to what extent rebellion, hostility, conflict, schism, and even war are conditioned by an