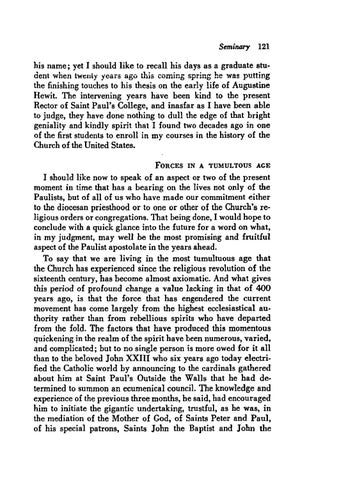 his name; yet I should like to recall his days as a graduate stu路 dent when tweuly years ago t.\is coming spring he was putting the finishing touches to his thesis on the early life of Augustine Hewit. The intervening years have been kind to the present Rector of Saint Paul&#39;s College, and inasfar as I have been able to judge, they have done nothing to dull the edge of that bright geniality and kindly spirit that I found two decades ago in one of the first students to enroll in my courses in the history of the Church of the United States. fORCES IN A TUMULTOUS AGE

I should like now to speak of an aspect or two of the present moment in time that has a bearing on the lives not only of the Paulists, but of all of us who have made our commitment either to the diocesan priesthood or to one or other of the Church&#39;s re路 ligious orders or congregations. That being done, I would hope to conclude with a quick glance into the future for a word on what, in my judgment, may well he the most promising and fruitful aspect of the Paulist apostolate in the years ahead. To say that we are living in the most tumultuous age that the Church has experienced since the religious revolution of the sixteenth century, has become almost axiomatic. And what gives this period of profound change a value lacking in that of 400 years ago, is that the force that has engendered the current movement has come largely from the highest ecclesiastical au路 thority rather than from rebellious spirits who have departed from the fold. The factors that have produced this momentous quickening in the realm of the spirit have been numerous, varied, and complicated; but to no single person is more owed for it all than to the beloved John XXIII who six years ago today electri路 fied the Catholic world by announcing to the cardinals gathered about him at Saint Paul&#39;s Outside the Walls that he had determined to summon an ecumenical council. The knowledge and experience of the previous three months, he said, had encouraged him to initiate the gigantic undertaking, trustful, as he was, in the mediation of the Mother of God, of Saints Peter and Paul, of his special patrons, Saints John the Baptist and John the