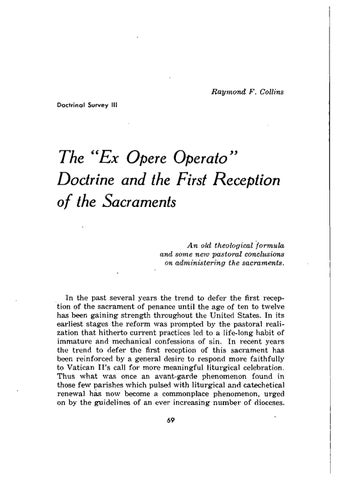 The &quot;Ex Opere Opera to&quot; Doctrine and the First Reception of the Sacraments An old theological formu/n, and some ne?V pa&lt;Jtoral conclmions on administering the sacraments.

In the past several years the trend to defer the first reception of the sacrament of penance until the age of ten to twelve has been gaining strength throughout the United States. In its earliest stages the reform was prompted by the pastoral realization that hitherto current practices led to a life-long habit of immature and mechanical confessions of sin. In recent years the trend to defer the first reception of this sacrament has been reinforced by a general desire to respond more faithfully to Vatican II&#39;s call for more meaningful liturgical celebration. Thus what was once an avant-garde phenomenon found in those few padshes which pulsed with liturgical and catechetical renewal has now become a commonplace phenomenon, urged on by the guidelines of an ever increasing number of dioceses. 69