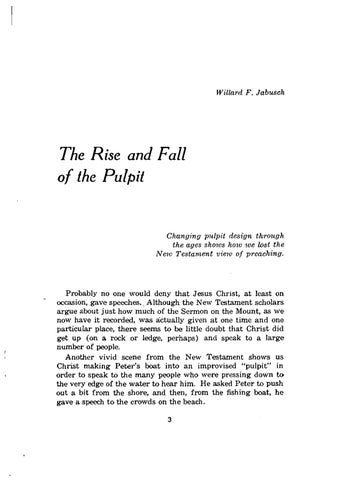 The Rise and Fall of the Pulpit

Changing pulpit design through the ages shows how we lost the New Testament view of preaching.

Probably no one would deny that Jesus Christ, at least on occasion, gave speeches.. Although the New Testament scholars argue about just how much of the Sermon on the Mount, as we now have it recorded, was actually given at one time and one particular place, there seems to be little doubt that Christ did get up (on a rock or ledge, perhaps) and speak to a large number of people. Another vivid scene from the New Testament shows us Christ making Peter&#39;s boat into an improvised &quot;pulpit&quot; in order to speak to the many people who were pressing down to the very edge of the water to hear him. He asked Peter to push out a bit from the shore, and then, from the fishing boat, he gave a speech to the crowds on the beach. 3