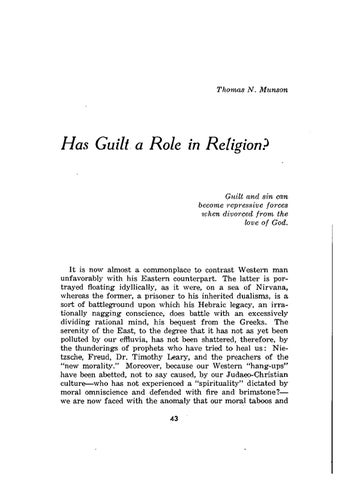 Guill a Role in Religion? Guilt and sin can

become 1Âˇep1Âˇessive forces 1vhen divorced from the wve of God.

It is now almost a commonplace to contrast Western man

unfavorably with his Eastern counterpart. The latter is portrayed floating idyllically, as it were, on a sea of Nirvana, whereas the former, a prisoner to his inherited dualisms, is a sort of battleground upon which his Hebraic legacy, an irrationally nagging conscience, does battle with an excessively dividing rational mind, his bequest from the Greeks. The serenity of the East, to the degree that it has not as yet been polluted by our effluvia, has not been shattered, therefore, by the thunderings of prophets who have tried to heal us: Nietzsche, Freud, Dr. Timothy Leary, and the preachers of the &quot;new morality.&quot; Moreover, because our Western &quot;hang-ups&quot; have been abetted, not to say caused, by our Judaeo-Christian culture--who has not experienced a &quot;spirituality&quot; dictated by moral omniscience and defended with fire and brimstone?we are now faced with the anomaly that our moral taboos and 43