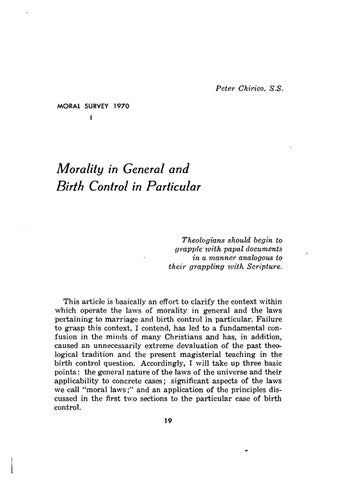 Morality in General and Birth Control in Particular

This article is basically an effort to clarify the context within which operate the laws of morality in general and the laws pertaining to marriage and birth control in particular. Failure to grasp this context, I contend, has led to a fundamental confusion in the minds of many Christians and has, in addition, caused an unnecessarily extreme devaluation of the past theo. logical tradition and the present magisterial teaching in the birth control question. Accordingly, I will take up three basic points: the general nature of the laws of the uni verse and their applicability to concrete cases; significant aspects of the laws we cali &quot;moral laws ;&quot; and an application of the principles discussed in the first two sections to the particular case of birth control. 19