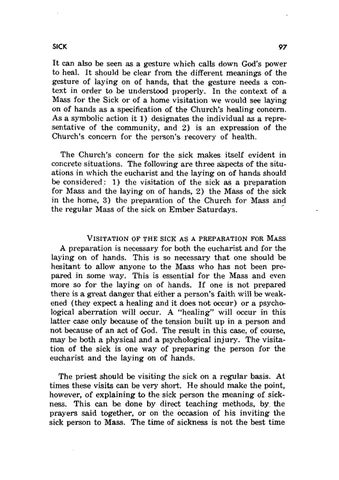 VISITATION OF THE SICK AS A PREPARATION FOR MASS

A preparation is necessary for both the eucharist and for the laying on of hands. This is so necessary that one should be hesitant to allow anyone to the Mass who has not been prepared in some way. This is essential for the Mass and even more so for the laying on of hands. If one is not prepared there is a great danger that either a person's faith will be weakened (they expect a healing and it does not occur) or a psychological aberration will occur. A "healing" will occur in this latter case only because of the tension built up in a person and not because of an act of God. The result in this case, of course, may be both a physical and a psychological injury. The visitation of the sick is one way of preparing the person for the eucharist and the laying on of hands. The priest should be visiting the sick on a regular basis. At times these visits can be very short. He should make the point, however, of explaining to the sick person the meaning of sickness. This can be done by direct teaching methods, by the prayers said together, or on the occasion of his inviting the sick person to Mass. The time of sickness is not the best time