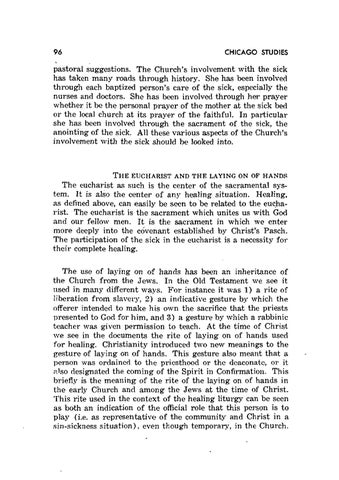 THE EUCHARIST AND THE LAYING ON OF HANDS

The eucharist as such is the center of the sacramental system. It is also the centetÂˇ of any healing situation. Healing, as defined above, can easily be seen to be related to the euc.harist. The eucharist is the sacrament which unites us with God and our fellow men. It is the sacrament in which we enter more deeply into the covenant established by Christ's Pasch. The participation of the sick in the eucharist is a necessity for their complete healing. The use of laying on of hands has been an inheritance of the Church from the Jews. In the Old Testament we see it used in many different ways. For instance it was 1) a rite of liberation from slavery, 2) an indicative gesture by which the offerer intended to make his own the sacrifice that the priests presented to God for him, and 3) a gesture by which a rabbinic teacher was given permission to teach. At the time of Christ we see in the documents the rite of laying on of hands used for healing. Christianity introduced two new meanings to the gesture of laying on of hands. This gesture also meant that a person was ordained to the priesthood or the deaconate, or it ,lso designated the coming of the Spirit in Confirmation. This briefly is the meaning of the rite of the laying on of hands in the early Church and among the Jews at the time of Christ. This rite used in the context of the healing liturgy can be seen as both an indication of the official role that this person is to play (i.e. as representative of the community and Christ in a sin-sickness situation), even though temporary, in the Church.