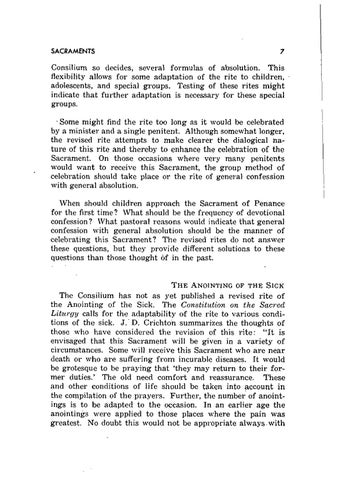 Consilium so decides, several formulas of absolution. This flexibility allows for some adaptation of the rite to children, adolescents, and special groups. Testing of these rites might indicate that further adaptation is necessary for these special groups. ·Some might find the rite too long as it would be celebrated by a minister and a single penitent. Although somewhat longer, the revised rite attempts to make clearer the dialogical nature of this rite and thereby to enhance the celebration of the Sacrament. On those occasions where very many penitents would want to receive this Sacrament, the group method of celebration should take place or the rite of general confession with general absolution. When should children approach the Sacrament of Penance for the first time? What should be the frequency of devotional confession? What pastoral reasons would indicate that general confession with general absolution should be the manner of celeb1·ating this Sacrament? The revised rites do not answer these questions, but they provide different solutions to these questions than those thought Of in the past.

THE ANOINTING OF THE SICK

The Consilium has not as yet published a revised rite of the Anointing of the Sick. The Constitution on the Sac1·ed Litw·gy calls for the adaptability of the rite to various conditions of the sick. J. ·D. Crichton summarizes the thoughts of those who have considered the revision of this rite: &quot;It is envisaged that this Sacrament will be given in a variety of circumstances. Some will receive this Sacrament who are near death or who are suffering from incurable diseases. It would be grotesque to be praying that &#39;they may return to their former duties.&#39; The old need comfort and reassurance. These and other conditions of life should be taken into account in the compilation of the prayers. Further, the number of anointings is to be adapted to the occasion. In an earlier age the anointings were applied to those places where the pain was greatest. No doubt this would not be appropriate always.with