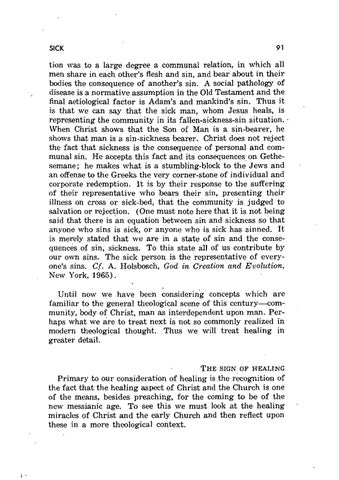 tion was to a large degree a communal relation, in which all men share in each other&#39;s flesh and sin, and bear about in their bodies the consequence of another&#39;s sin. A social pathology of disease is a normative assumption in the Old Testament and the final aetiological factor is Adam&#39;s and mankind&#39;s sin. Thus it is that we can say that the sick man, whom Jesus heals, is representing the community in its fallen-sickness-sin situation. Âˇ When Christ shows that the Son of Man is a sin-beatÂˇer, he shows that man is a sin-sickness bearer. Christ does not reject the fact that sickness is the consequence of personal and communal sin. He accepts this fact and its consequences on Gethesemane; he makes what is a stumbling-block to the Jews and an offense to the Greeks the very corner-stone of individual and corporate redemption. It is by their response to the suffering of their representative who bears their sin, presenting their illness on cross or sick-bed, that the community is judged to salvation or rejection. (One must note here that it is not being said that there is an equation between sin and sickness so that anyone who sins is sick, or anyone who is sick has sinned. It is merely stated that we are in a state of sin and the consequences of sin, sickness. To this state all of us contribute by our own sins. The sick person is the representative of everyone&#39;s sins. Cf. A. Holsbosch, God in Cuation and Evolution, New York, 1965). Until now we have been considering concepts which are familiar to the general theological scene of this century-community, body of Christ, man as interdependent upon man. Perhaps what we are to treat next is not so commonly realized in modern theological thought. Thus we will treat healing in greater detail.

Primary to our consideration of healing is the recognition of the fact that the healing aspect of Christ and the Church is one of the means, besides preaching, for the coming to be of the new messianic age. To see this we must look at the healing miracles of Christ and the early Church and then reflect upon these in a more theological context.