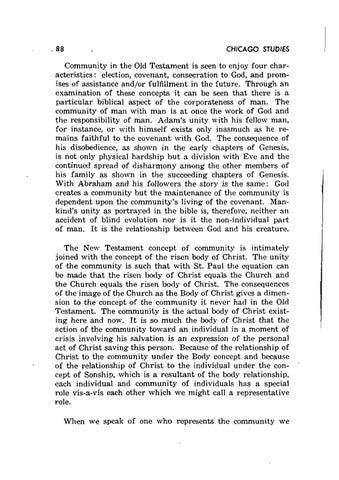 Community in the Old Testament is seen to enjoy four characteristics: election, covenant, consecration to God, and promises of assistance andjor fulfillment in the future. Through an examination of these concepts it can be seen that there is a particular biblical aspect of the corporateness of man. The community of man with man is at once the work of God and the responsibility of man. Adam's unity with his fellow man, for instance, or with himself exists only inasmuch as he remains faithful to the covenant with God. The consequence of his disobedience, as shown in the early chapters of Genesis, is not only physical hardship but a division with Eve and the continued spread of disharmony among the other members of his family as shown in the succeeding chapters of Genesis. With Abraham and his followers the story is the same: God creates a community but the maintenance of the community is dependent upon the community's living of the covenant. Mankind's unity as portrayed in the bible is, therefore, neither an accident of blind evolution nor is it the non-individual part of man. It is the relationship between God and his creature. The New Testament concept of community is intimately joined with the concept of the risen body of Christ. The unity of the community is such that with St. Paul the equation can be made that the risen body of Christ equals the Church and the Church equals the risen body of Christ. The consequences of the image of the Church as the Body of Christ gives a dimension to the concept of the community it never had in the Old Testament. The community is the actual body of Christ existing here and now. It is so much the body of Christ that the action of the community toward an individual in a moment of cdsis involving his salvation is an expression of the personal act of Christ saving this person. Because of the relationship of Christ to the community under the Body concept and because of the relationship of Christ to the individual under the concept of Sonship, which is a resultant of the body relationship, each individual and community of individuals has a special role vis-a-vis each other which we might call a representative role. When we speak of one who represents the community we