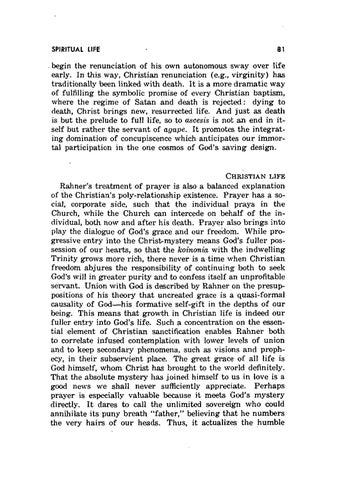 . begin the renunciation of his own autonomous sway over life early. In this way, Christian renunciation (e.g., virginity) has traditionally been linked with death. It is a more dramatic way of fulfilling the symbolic promise of every Christian baptism, where the regime of Satan and death is rejected: dying to death, Christ brings new, resurrected life. And just as death is but the prelude to full life, so to ascesis is not an end in itself but rather the servant of agape. It promotes the integrating domination of concupiscence which anticipates our immortal participation in the one cosmos of God&#39;s saving design.

Rahner&#39;s treatment of prayer is also a balanced explanation of the Christian&#39;s poly-relationship existence. Prayer has a social, corporate side, such that the individual prays in the Church, while the Church can intercede on behalf of the individual, both now and after his death. Prayer also brings. into play the dialogue of God&#39;s grace and our freedom. While progressive entry into the Christ-mystery means God&#39;s fuller possession of our hearts, so that the koinania with the indwelling Trinity grows more rich, there never is a time when Christian freedom abjures the responsibility of continuing both to seek God&#39;s will in greater purity and to confess itself an unprofitable servant. Union with God is described by Rahner on the presuppositions of his theory that uncreated grace is a quasi-formal causality of God-his formative self-gift in the depths of our being. This means that growth in Christian life is indeed our fuller entry into God&#39;s life. Such a concentration on the essential element of Christian sanctification enables Rahner both to correlate infused contemplation with lower levels of union and to keep secondary phenomena, such as visions and prophecy, in their subservient place. The great grace of all life is God himself, whom Christ has brought to the world definitely. That the absolute mystery has joined himself to us in love is a good news we shall never sufficiently appreciate. Perhaps prayer is especially valuable because it meets God&#39;s mystery directly. It dares to call the unlimited sovereign who could annihilate its puny breath &quot;father,&quot; believing that he numbers the very hairs of our heads. Thus, it actualizes the humble