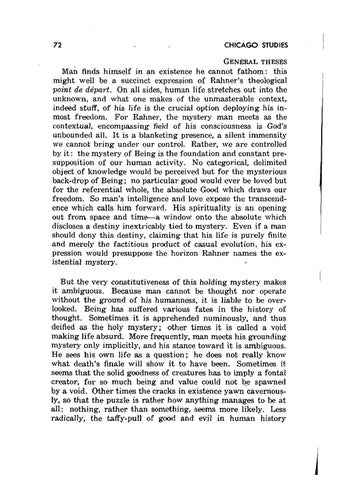 Man finds himself in an existence he cannot fathom: this might well be a succinct expression of Rahner&#39;s theological point de depa1Âˇt. On all sides, human life stretches out into the unknown, and what one makes of the unmasterable context, indeed stuff, of his life is the crucial option deploying his inmost freedom. For Rahner, the mystery man meets as the contextual, encompassing field of his consciousness is God&#39;s unbounded all. It is a blanketing presence, a silent immensity we cannot bring under our control. Rather, we are controlled by it: the mystery of Being is the foundation and constant presupposition of our human activity. No categorical, delimited object of knowledge would be perceived but for the mysterious back-drop of Being; no particular good would ever be loved but for the referential whole, the absolute Good which draws our freedom. So man&#39;s intelligence and love expose the transcendence which calls him forward. His spirituality is an opening out from space and time-a window onto the absolute which discloses a destiny inextricably tied to mystery. Even if a man should deny this destiny, claiming that his life is purely finite and merely the factitious product of casual evolution, his expression would presuppose the horizon Rahner names the existential mystery. But the very constitutiveness of this holding mystetÂˇy makes it ambiguous. Because man cannot be thought nor operate without the ground of his humanness, it is liable to be overlooked. Being has suffered various fates in the history of thought. Sometimes it is apprehended numinously, and thus deified as the holy mystery; other times it is called a void making life absurd. More frequently, man meets his grounding mystery only implicitly, and his stance toward it is ambiguous. He sees his own life as a question; he does not really know what death&#39;s finale will show it to have been. Sometimes it seems that the solid goodness of creatures has to imply a fontal creator, for so much being and value could not ~e spawned by a void. Other times the cracks in existence yawn cavernously, so that the puzzle is rather how anything manages to be at all: nothing,. rather than something, seems more likely. Less radically, the taffy-pull of good and evil in human history