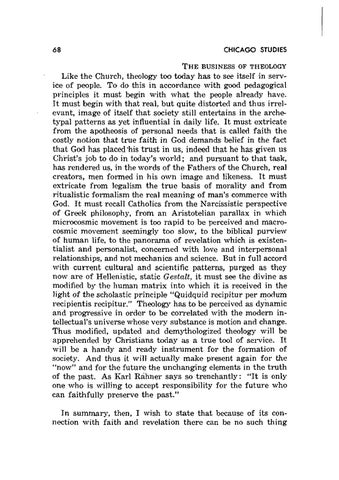 CHICAGO STUDIES THE BUSINESS OF THEOLOGY

Like the Church, theology too today has to see itself in service of people. To do this in accordance with good pedagogical principles it must begin with what the people already have. It must begin with that real, but quite distorted and thus inelevant, image of itself that society still entertains in the archetypal patterns as yet influential in daily life. It must extricate from the apotheosis of personal needs that is called faith the costly notion that true faith in God demands belief in the fact that God has placed Âˇhis trust in us, indeed that he has given us Christ's job to do in today's world; and pursuant to that task, has rendered us, in the words of the Fathers of the Church, real creators, men formed in his own image and likeness. It must extricate from legalism the true basis of morality and from ritualistic formalism the real meaning of man's commerce with God. It must recall Catholics from the Narcissistic perspective of Greek philosophy, from an Aristotelian parallax in which microcosmic movement is too rapid to be perceived and macrocosmic movement seemingly too slow, to the biblical purview of human life, to the panorama of revelation which is existentialist and personalist, concerned with love and interpersonal relationships, and not mechanics and science. But in full accord with current cultural and scientific patterns, purged as they now are of Hellenistic, static Gestalt, it must see the divine as modified by the human matrix into which it is received in the light of the scholastic principle "Quidquid recipitur per modum recipientis recipitur." Theology has to be perceived as dynamic and progressive in order to be correlated with the modern intellectual's universe whose very substance is motion and change. Thus modified, updated and demythologized theology will be apprehended by Christians today as a true tool of service. It will be a handy and ready instrument for the formation of society. And thus it will actually make present again for the "now" and for the future the unchanging elements in the truth of the past. As Karl Rahner says so trenchantly: "It is only one who is willing to accept responsibility for the future who can faithfully preserve the past." In summary, then, I wish to state that because of its connection with faith and 1Âˇevelation there can be no such thing