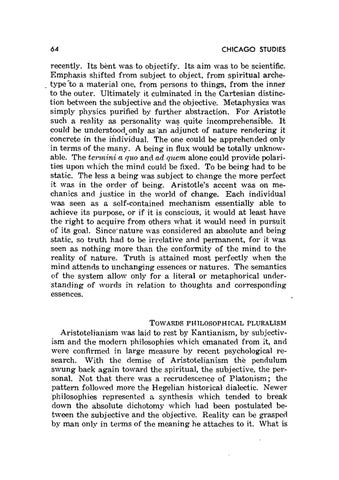 recently. Its bent was to objectify. Its aim was to be scientific. Emphasis shifted from subject to object, from spiritual arche- type 'to a material one, from persons to things, from the inner to the outer. Ultimately it culminated in the Cartesian distinction between the subjective and the objective. Metaphysics was simply physics purified by further abstraction. For Aristotle such a reality as personality wa~ quite incomprehensible. It could be understood only as Âˇan adjunct of nature rendering it concrete in the indi~idual. The one could be apprehended only in terms of the many. A being in flux would be totally unknowable. The teT1nini a quo and ad quem alone could provide polarities upon which the mind could be fixed. To be being had to be static. The less a being was subject to change the more perfect it was in the order of being. Aristotle's accent was on mechanics and justice in the world of change. Each individual was seen as a self-contained mechanism essentially able to achieve its purpose, or if it is conscious, it would at least have the right to acquire from others what it would need in pursuit of its goal. SinceÂˇ nature was considered an absolute and being static, so truth had to be irrelative and permanent, for it was seen as nothing more than the confonnity of the mind to the reality of nature. Truth is attained most perfectly when the mind attends to unchanging essences or natures. The semantics of the system allow only for a literal or metaphorical understanding of words in relation to thoughts and corresponding essences.

Aristotelianism was laid to rest by Kantianism, by subjectivism and the modern philosophies which emanated from it, and were confirmed in large measure by recent psychological research. With the demise of Aristotelianism the pendulum swung back again toward the spiritual, the subjective, the personal. Not that there was a recrudescence of Platonism; the pattern followed more the Hegelian historical dialectic. Newer philosophies represented a synthesis which tended to break down the absolute dichotomy which had been postulated between the subjective and the objective. Reality can be grasped by man only in terms of the meaning he attaches to it. What is