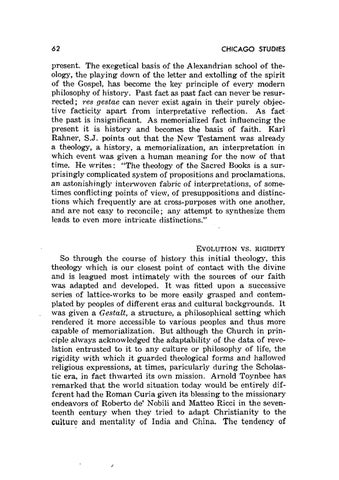 present. The exegetical basis of the Alexandrian school of theology, the playing down of the letter and extolling of the spirit of the Gospel, has become the key principle of every modern philosophy of history. Past fact as past fact can never be resurrected; res gestae can never exist again in their purely objective facticity apart from interpretative reflection. As factÂˇ the past is insignificant. As memorialized fact influencing the present it is history and becomes the basis of faith. Karl Rahner, S.J. points out that the New Testament was already a theology, a history, a memorialization, an interpretation in which event was given a human meaning for the now of that time. He writes: "The theology of the Sacred Books is a surprisingly complicated system of propositions and proclamations, an astonishingly intenvoven fabric of interpretations, of sometimes conflicting points of view, of presuppositions and distinctions which frequently are at cross-purposes with one another, and are not easy to reconcile; any attempt to synthesize them leads to even more intricate distinctions."

So through the course of history this initial theology, this theology which is our closest point of contact with the divine and is leagued most intimately with the sources of our faith was adapted and developed. It was fitted upon a successive series of lattice-works to be more easily grasped and contemplated by peoples of different eras and cultural backgrounds. It was given a Gestalt, a structure, a philosophical setting which rendered it more accessible to various peoples and thus more capable of memorialization. But although the Church in principle always acknowledged the adaptability of the data of revelation entrusted to it to any culture or philosophy of life, the rigidity with which it guarded theological forms and hallowed religious expressions, at times, paricularly during the Scholastic era, in fact thwarted its own mission. Arnold Toynbee has remarked that the world situation today would be entirely different had the Roman Curia given its blessing to the missionary endeavors of Roberto de' Nobili and Matteo Ricci in the seventeenth century when they tried to adapt Christianity to the culture and mentality of India and China. The tendency of