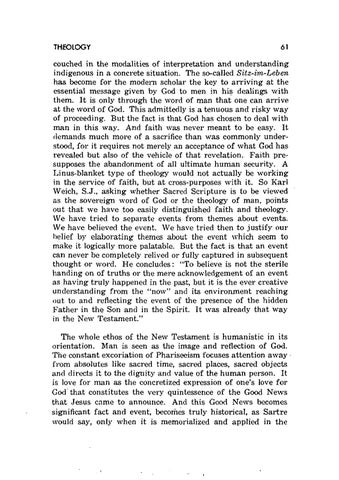 couched in the modalities of interpretation and understanding indigenous in a concrete situation. The so-called Sitz-i1n-Leben has become for the modern scholar the key to arriving at the essential message given by God to men in his dealings with them. It is only through the word of man that one can arrive at the word of God. This admittedly is a tenuous and risky way of proceeding. But the fact is that God has chosen to deal with man in this way. And faith was never meant to be easy. It demands much more of a sacrifice than was commonly understood, for it requires not merely an acceptance of what God has revealed but also of the vehicle of that revelation. Faith presupposes the abandonment of all ultimate human security. A Linus-blanket type of theology would not actually be working in the service of faith, but at cross-purposes with it. So Karl Weich, S.J., asking whether Sacred Scripture is to be viewed as the sovereign word of God or the theology of man, points out that we have too easily distinguished faith and theology. We have tried to separate events from themes about events. We have believed the event. We have tried then to justify our helief by elaborating themes about the event which seem to make it logically more palatable. But the fact is that an event can never be completely relived or fully captured in subsequent thought or word. He concludes: &quot;To believe is not the sterile handing on of truths or the mere acknowledgement of an event as having truly happened in the past, but it is the ever creative understanding from the &quot;now&quot; and its environment reaching nut to and reflecting the event of the presence of the hidden Father in the Son and in the Spirit. It was alrearly that way in the New Testament.&quot; The whole ethos of the New Testament is humanistic in its orientation. Man is seen as the image and reflection of God. The constant excoriation of Phariseeism focuses attention awayÂˇ from absolutes like sacred time, sacred places, sacred objects and directs it to the dignity and value of the human person. It is love for nu111 as the concretized expression of one&#39;s love for God. that constitutes the very quintessence of the Good News that Jesus came to announce. And this Good News becomes significant fact and event, becomes truly historical, as Sartre would say, only when it is memorialized and applied in the