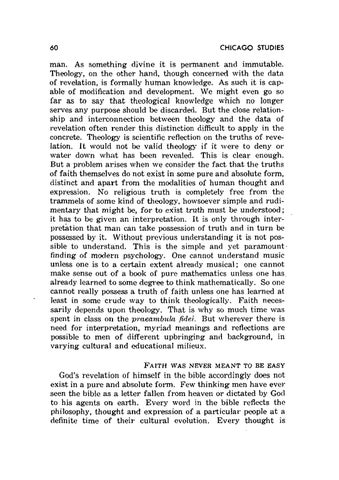 man. As something divine it is permanent and immutable. Theology, on the other hand, though concerned with the data of revelation, is formally human knowledge. As such it is capable of modification and development. We might even go so far as to say that theological knowledge which no longer serves any purpose should be discarded. But the close relationship and interconnection between theology and the data of revelation often render this distinction difficult to apply in the concrete. Theology is scientific reflection on the truths of revelation. It would not be valid theology if it were to deny or water down what has been revealed. This is clear enough. But a problem arises when we consider the fact that the truths of faith themselves do not exist in some pure and absolute form, distinct and apart from the modalities of human thought ami expression. No religious truth is completely free from the trammels of some kind of theology, howsoever simple and rudimentary that might be, for to exist truth must be understood; it has to be given an interpretation. It is only through interpretation that man can take possession of truth and in turn be possessed by it. Without previous understanding it is not possible to understand. This is the simple and yet paramountÂˇ finding of modern psychology. One cannot understand music unless one is to a certain extent already musical; one cannot make sense out of a book of pure mathematics unless one has. already learned to some degree to think mathematically. So one cannot really possess a truth of faith unless one has learned at least in some crude way to think theologically. Faith necessarily depends upon theology. That is why so much time was spent in class on the praearnbu/i, fidei. But wherever there is need for interpretation, myriad meanings and reflections are possible to men of different upbringing and background, in varying cultural and educational milieux. FAITH WAS NEVER MEANT TO BE EASY

God&#39;s revelation of himself in the bible accordingly does not exist in a pure and absolute form. Few thinking men have eve1Âˇ seen the bible as a letter fallen from heaven or dictated by God to his agents on earth. Every word in the bible reflects the philosophy, thought and expression of a patiicular people at a definite time of their cultural evolution. Every thought is