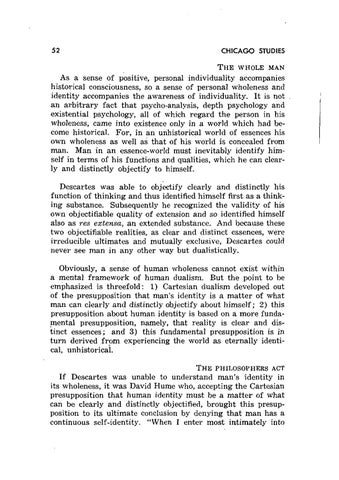 As a sense of positive, personal individuality accompanies historical consciousness, so a sense of personal wholeness and identity accompanies the awareness of individuality. It is not an arbitrary fact that psycho-analysis, depth psychology and existential psychology, all of which regard the person in his wholeness, came into existence only in a world which had become historical. For, in an unhistorical world of essences his own wholeness as well as that of his world is concealed from man. Man in an essence-world must inevitably identify himself in terms of his functions and qualities, which he can clearly and distinctly objectify to himself. Descartes was able to objectify clearly and distinctly his function of thinking and thus identified himself first as a thinking substance. Subsequently he recognized the validity of his own objectifiable quality of extension and so identified himself also as res extensa, an extended substance. And because these two objectifiable realities, as clear and distinct essences, were irreducible ultimates and mutually exclusive, Descartes could never see man in any other way but dualistically. Obviously, a sense of human wholeness cannot exist within a mental framew01Âˇk of human dualism. But the point to be emphasized is threefold: 1) Cartesian dualism developed out of the presupposition that man's identity is a matter of what man can clearly and distinctly objectify about himself; 2) this presupposition about human identity is based on a more fundamental presupposition, namely, that reality is clear and distinct essences; and 3) this fundamental presupposition is in turn derived from experiencing the world as eternally identical, unhistoricai. THE PHILOSOPHERS ACT

If Descartes was unable to understand man's identity in

its wholeness, it was David Hume who, accepting the Cartesian presupposition that human identity must be a matter of what can be clearly and distinctly objectified, brought this presupposition to its ultimate conclusion by denying that man has a continuous self-identity. "When I enter most intimately into