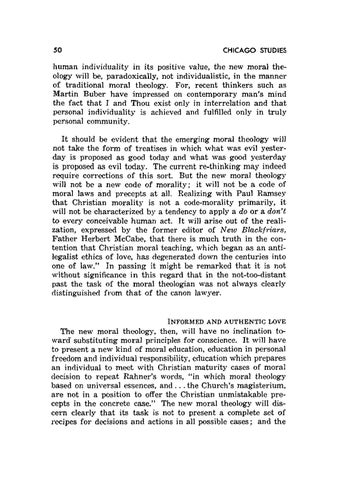 human individuality in its positive value, the new moral theology will be, paradoxically, not individualistic, in the manner of traditional moral theology. For, recent thinkers such as Martin Buber have impressed on contemporary man&#39;s mind the fact that I and Thou exist only in interrelation and that personal individuality is achieved and fulfilled only in truly personal community. It should be evident that the emerging moral theology will not take the form of treatises in which what was evil yesterday is proposed as good today and what was good yesterday is proposed as evil today. The current re-thinking may indeed require corrections of this sort. But the new moral theology will not be a new code of morality; it will not be a code of moral laws and precepts at all. Realizing with Paul Ramsey that Christian morality is not a code-morality primarily, it will not be characterized by a tendency to apply a do or a don&#39;t to every conceivable human act. It will arise out of the realization, expressed by the former editor of New Blackfriars, Father Herbert McCabe, that there is much truth in the contention that Christian moral teaching, which began as an antilegalist ethics of love, has degenerated down the centuries into one of law.&quot; In passing it might be remarked that it is not without significance in this regard that in the not-too-distant past the task of the moral theologian was not always clearly distinguished from that of the canon lawyer.

The new moral theology, then, will have no inclination towardÂˇ substituting moral principles for conscience. It will have to present a new kind of moral education, education in personal freedom and individual responsibility, education which prepares an individual to meet with Christian maturity cases of moral decision to repeat Rahner&#39;s words, &quot;in which moral theology based on universal essences, and ... the Church&#39;s magisterium, are not in a position to offer the Christian unmistakable precepts in the concrete case.&quot; The new moral theology will discern clearly that its task is not to present a complete set of recipes for decisions and actions in all possible cases; and the