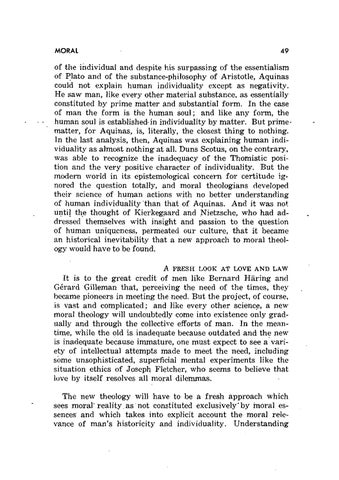 of the individual and despite his surpassing of the essentialism of Plato and of the substance-philosophy of Aristotle, Aquinas could not explain human individuality except as negativity. He saw man, like every other material substance, as essentially constituted by prime matter and substantial form. In the case of man the form is the human soul; and like any form, the human soul is established· in individuality by matter. But prime· matter, for Aquinas, is, literally, the closest thing to nothing. In the last analysis, then, Aquinas was explaining human individuality as almost nothing at all. Duns Scotus, on the contrary, was able to recognize the inadequacy of the Thomistic position and the very positive character of individuality. But the modern world in its epistemological concern for certitude ignored the question totally, and moral theologians developed their science of human actions with no better understanding of human individuality ·than that of Aquinas. And it was not u~ti! th.e thought of Kierkegaard and Nietzsche, who had addressed themselves with insight and passion to the question of human uniqueness, permeated our culture, that it became an historical inevitability that a new approach to moral theology would have to be found. A FRESH LOOK AT LOVE AND LAW It is to the great credit of men like Bernard Haring and Gerard Gilleman that, perceiving the need of the times, they became pioneers in meeting the need. But the project, of course, is vast and complicated; and like every other scienci&#39;, a new moral theology will undoubtedly come into existence only gradually and through the collective efforts of man. In the meantime, while the old is inadequate because outdated and the new is inadequate because immature, one must expect to see a· variety of intellectual attempts made to meet the need, including some unsophisticated, superficial mental experiments like the situation ethics of Joseph Fletcher, who seems to believe that love by itself resolves all moral dilemmas.

The new theology will have to be a fresh approach which sees mora]· reality. as· not constituted exclusively· by in oral essences and which takes into explicit account the moral relevance of man&#39;s historicity and individuality. Understanding