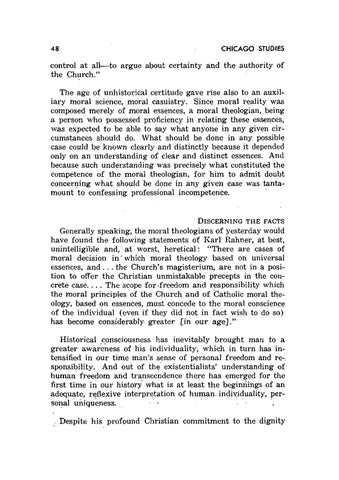 control at all-to argue about certainty and the authority of the Church.&quot; The age of unhistorical certitude gave rise also to an auxiliary moral science, moral casuistry. Since moral reality was composed merely of moral essences, a moral theologian, being a person who possessed proficiency in relating these essences, was expected to be able to say what anyone in any given circumstances should do. What should be done in any possible case could be known clearly and distinctly because it depended only on an understanding of clear and distinct essences. And because such understanding was precisely what constituted the competence of the moral theologian, for him to admit doubt concerning what should be done in any given case was tantamount to confessing professional incompetence. ·

Generally speaking, the moral theologians of yesterday would have found the following statements of Karl Hahner, at best, unintelligible and, at worst, heretical: &quot;There are cases of moral decision in- which moral theology based on universal essences, and ... the Church&#39;s magisterium, are not in a position to offer the Christian unmistakable precepts in the concrete case.... The scope for .freedom and responsibility which the moral principles of the Church and of Catholic moral theology, based on essences, must concede to the moral conscience of the individual (even if they did not in fact wish to do so) has become considerably. greater [in our age].&quot; Historical _consciousness has inevitably brought man to a greater awareness of his individuality, which in turn has intensified in our time man&#39;s sense of personal freedom and re-. sponsibility. And out of the. existentialists&#39; understanding of human· freedom and transcendence there has emerged for the first time in our history what is at least the beginnings of an adequate, reflexive interpretation of human. indi&#39;{iduality, personal uniqu~ness. ·· · · ·· .Despite his profound Christian commitment to the dignity