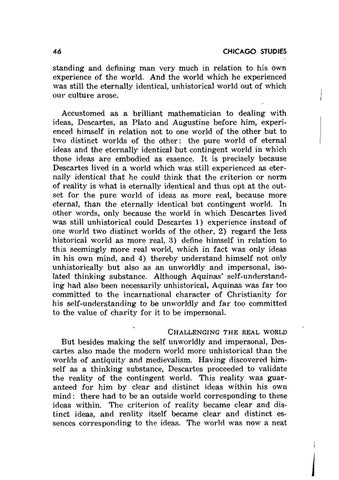 standing and defining man very much in relation to his own experience of the world. And the world which he experienced was still the eternally identical, unhistorical world out of which our culture arose. Accustomed as a brilliant mathematician to dealing with ideas, Descartes, as Plato and Augustine before him, experienced himself in relation not to one world of the other but to two distinct worlds of the other: the pure world of eternal ideas and the eternally identical but contingent world in which those ideas are embodied as essence. It is precisely because Descartes lived in a world which was still experienced as eternally identical that he could think that the criterion or norm of reality is what is eternally identical and thus opt at the outset for the pure world of ideas as more real, because more eternal, than the eternally identical but contingent world. In other words, only because the world in which Descartes lived was still unhistorical could Descartes 1) experience instead of one world two distinct worlds of the other, 2) regard the less historical world as more real, 3) define himself in relation to this seemingly more real world, which in fact was only ideas in his own mind, and 4) thereby understand himself not only unhistorically but also as an unworldly and impersonal, isolated thinking substance. Although Aquinas' self-understanding had also been necessarily unhistorical, Aquinas was far too committed to the incarnational character of Christianity for his self-understanding to be unworldly and far too committed to the value of charity for it to be impersonal. CHALLENGING THE REAL WORLD

But besides making the self unworldly and impersonal, Descartes also made the modern world more unhistorical than the worlds of antiquity and medievalism. Having discovered himself as a thinking substance, Descartes proceeded to validate the reality of the contingent world. This reality was guaranteed for him by clear and distinct ideas within his own mind: there had to be an outside world corresponding to these ideas within. The criterion of reality became clear and distinct ideas, and reality itself became clear and distinct essences corresponrling to the ideas. The world was now a neat