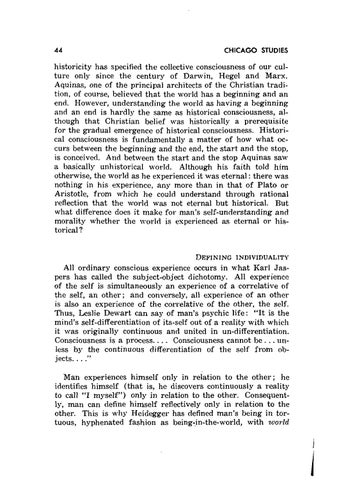 historicity has specified the collective consciousness of our culture only since the century of Darwin, Hegel and Marx. Aquinas, one of the principal architects of the Christian tradition, of course, believed that the world has a beginning and an end. However, understanding the world as having a beginning and an end is hardly the same as historical consciousness, although that Christian belief was historically a prerequisite for the gradual emergence of historical consciousness. Historical consciousness is fundamentally a matter of how what occurs between the beginning and the end, the start and the stop, is conceived. And between the start and the stop Aquinas saw a basically unhistorical world. Although his faith told him otherwise, the world as he experienced it was eternal: there was nothing in his experience, any more than in that of Plato or Aristotle, from which he could understand through rational reflection that the world was not eternal but historical. But what difference does it make for man's self-understanding and morality whether the world is experienced as eternal OJ" historical?