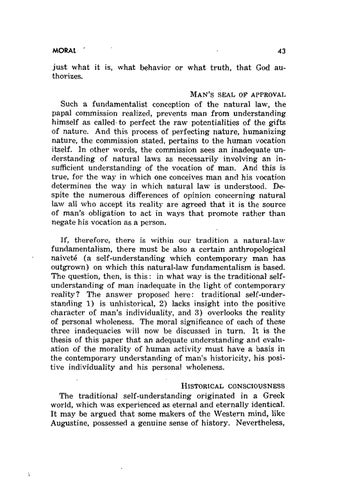 just what it is, what behavior or what truth, that God authorizes. MAN&#39;S SEAL OF APPROVAL

Such a fundamentalist conception of the natural law, the papal commission realized, prevents man from understanding himself as calledÂˇ to perfect the raw potentialities of the gifts of nature. And this process of perfecting nature, humanizing nature, the commission stated, pertains to the human vocation itself. In other words, the commission sees an inadequate understanding of natural laws as necessarily involving an insufficient understanding of the vocation of man. And this is true, for the way in which one conceives man and his vocation determines the way in which natural law is understood. Despite the numerous differences of opinion concerning natural law all who accept its reality are agreed that it is the source of man&#39;s obligation to act in ways that promote rather than negate his vocation as a person. If, therefore, there is within our tradition a natura1-Iaw

fundamentalism, there must be also a certain anthropological naivete (a self-understanding which contemporary man has outgrown) on which this natural-law fundamentalism is based. The question, then, is this: in what way is the traditional selfunderstanding of man inadequate in the light of contemporary reality? The answer proposed here: traditional self-understanding 1) is unhistorical, 2) lacks insight into the positive character of man&#39;s individuality, and 3) overlooks the reality of personal wholeness. The moral significance of each of these three inadequacies will now be discussed in turn. It is the thesis of this paper that an adequate understanding ancl evaluation of the morality of human activity must have a basis in the contemporary understanding of man&#39;s historicity, his positive individuality and his personal wholeness. HISTORICAL CONSCIOUSNESS

The traditional self-understanding originated in a Greek world, which was experienced as eternal and eternally identical. It may be argued that some makers of the Western mind, like Augustine, possessed a genuine sense of history. Nevertheless,