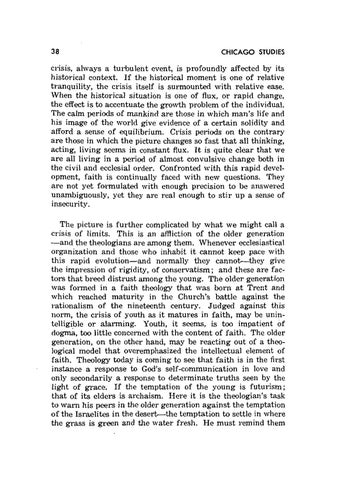 crisis, always a turbulent event, is profoundly affected by its historical context. If the historical moment is one of relative tranquility, the crisis itself is surmounted with relative ease. When the historical situation is one of flux, or rapid change, the effect is to accentuate the growth problem of the individual. The calm periods of mankind are those in which man's life and his image of the world give evidence of a certain solidity and afford a sense of equilibrium. Crisis periods on the contrary are those in which the picture changes so fast that all thinking, acting, living seems in constant flux. It is quite clear that we are all living in a period of almost convulsive change both in the civil and ecclesial order. Confronted with this rapid development, faith is continually faced with new questions. They are not yet formulated with enough precision to be answered unambiguously, yet they are real enough to stir up a sense of insecurity. The picture is further complicated by what we might call a crisis of limits. This is an affliction of the older generation -and the theologians are among them. Whenever ecclesiastical organization and those who inhabit it cannot keep pace with this rapid evolution-and normally they cannot--they give the impression of rigidity, of conset-vatism; and these are factors that breed distrust among the young. The older generation was fotmed in a faith theology that was born at Trent and which reached maturity in the Church's battle against the rationalism of the nineteenth century. Judged against this norm, the crisis of youth as it matures in faith, may be unintelligible or alarming. Youth, it seems, is too impatient of dognll., too little concerned with the content of faith. The older generation, on the other hand, may be reacting out of a theological model that overemphasized the intellectual element of faith. Theology today is coming to see that faith is in the first instance a response to God's self-communication in love and only secondarily a response to determinate truths seen by the light of grace. If the temptation of the young is futurism; that of its elders is archaism. Here it is the theologian's task to warn his peers in the older generation against the temptation of the Israelites in the desert--the temptation to settle in where the grass is green and the water fresh. He must remind them