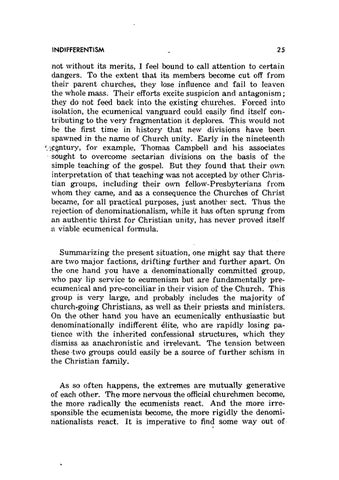 not without its merits, I feel bound to call attention to certain dangers. To the extent that its members become cut off from their parent churches, they lose influence and fail to leaven the whole mass. Their efforts excite suspicion and antagonism; they do not feed back into the existing churches. Forced into isolation, the ecumenical vanguard could easily find itself contributing to the very fragmentation it deplores. This would not be the first time in history that new divisions have been spawned in the name of Church unity. Early in the nineteenth •,;~;;ntury, for example, Thomas Campbell and his associates · s6ught to overcome sectarian divisions on the basis of the simple teaching of the gospel. But they found that their own interpretation of that teaching was not accepted by other Christian groups, including their own fellow-Presbyterians from whom they came, and as a consequence the Churches of Christ became, for all practical purposes, just another sect. Thus the rejection ·of denominationalism, while it has often sprung from an authentic thirst for Christian unity, has never proved itself H viable ecumenical formula. Summarizing the present situation, one might say that there are two major factions, drifting further and further apart. On the one hand you have a denominationally committed group, who pay lip service to ecumenism but are fundamentally preecumenical and pre-conciliar in their vision of the Church. This group is very large, and probably includes the majority of church-going Christians, as well as their priests and ministers. On the other hand you have an ecumenically enthusiastic but denominationally indifferent elite, who are rapidly losing patience with the inherited confessional structures, which they dismiss as anachronistic and irrelevant. The tension between these two groups could easily be a source of further schism in the Christian family. As so often happens, the extremes are mutually generative of each other. The more nervous the official churchmen become, the more radically the ecumenists react. And the more irresponsible the ecumenists become, the more rigidly the denominationalists react. It is imperative to find some way out of·