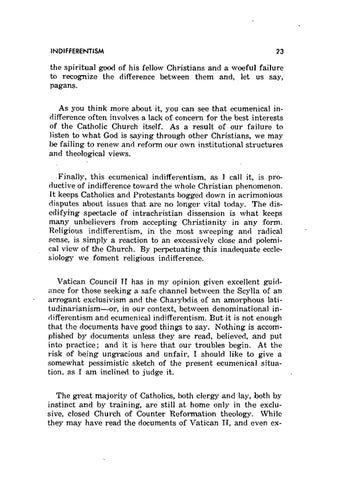 the spiritual good of his fellow Christians and a woeful failure to re<:ognize the difference between them and, let us say, pagans. As you think more about it, you can see that e<:umenical indifference often involves a lack of concern for the best interests of the Catholic Church itself. As a result of our failure to listen to what God is saying through other Christians, we may be failing to renew and reform our own institutional structures and theological views . .Finally, this ecumenical indifferentism, as I call it, is productive of indifference toward the whole Christian phenomenon. It keeps Catholics and Protestants bogged down in acrimonious disputes about issues that are no longer vital today. The disedifying spe<:tacle of intrachristian dissension is what keeps many unbelievers from accepting Christianity in any form. Religious indifferentism, in the most sweeping ami radical sense, is simply a reaction to an excessively close and polemical view of the Church. By perpetuating this inadequate ecclesiology we foment religious indifference. Vatican Council II has in my opinion given excellent guidance for those seeking a safe channel between the Scylla of an arrogant exclusivism and the Charybdis of an amorphous latitudinarianism--or, in our context, between denominational inrlifferentism and ecumenical indifferentism. But it is not enough that the documents have good things to say. Nothing is accomplished by documents unless they are read, believed, and put into practice; and it is here that our troubles begin. At the risk of being ungracious and unfair, I should like to give a somewhat pessimistic sketch of the present ecumenical situation. as I am inclined to judge it. The great majority of Catholics, both clergy and lay, both by instinct and by training, are still at home only in the exclusive, closed Church of Counter Reformation theology. While they may have read the documents of Vatican IT, and even ex-