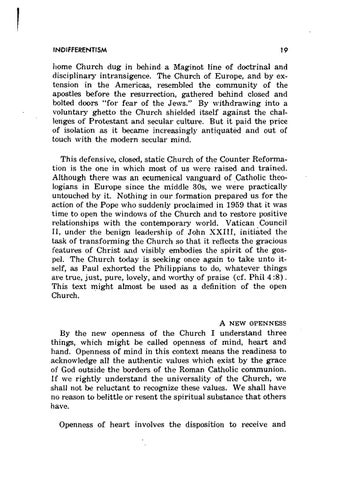 home Church dug in behind a Maginot line of doctrinal and disciplinary intransigence. The Church of Europe, and by extension in the Americas, resembled the community of the apostles before the resurrection, gathered behind closed and bolted doors "for fear of the Jews." By withdrawing into a voluntary ghetto the Church shielded itself against the challenges of Protestant and secular culture. But it paid the price of isolation as it became increasingly antiquated and out of touch with the modern secular mind. This defensive, closed, static Church of the Counter Reformation is the one in which most of us were raised and trained. Although there was an ecumenical vanguard of Catholic theologians in Europe since the middle 30s, we were practically untouched by it. Nothing in our formation prepared us for the action of the Pope who suddenly proclaimed in 1959 that it was time to open the windows of the Church and to restore positive relationships with the contemporary world. Vatican Council II, under the benign leadership of John XXIII, initiated the task of transforming the Church so that it reflects the gracious features of Christ and visibly embodies the spirit of the gospel. The Church today is seeking once again to take unto itself, as Paul exhorted the Philippians to do, whatever things are ttÂˇue, just, pure, lovely, and wot-thy of praise (cf. Phil 4 :8). This text might almost be used as a definition of the open Church. A NEW OPENNESS By the new openness of the Church I understand three things, which might be called openness of mind, heart and hand. Openness of mind in this context means the readiness to acknowledge all the authentic values which exist by the grace of God outside the borders of the Roman Catholic communion. If we rightly understand the universality of the Church, we shall not be reluctant to recognize these values. We shall have no reason to belittle or resent the spiritual substance that others have.

Openness of heart involves the disposition to receive and