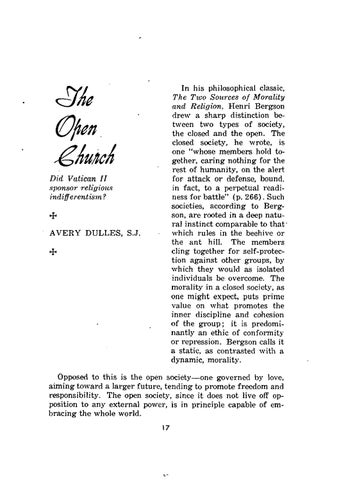 In his philosophical classic, The Two Sources of Morality and Religion, Henri Bergson drew a sharp distinction between two types of society, the closed and the open. The closed society, he wrote, is one &quot;whose members hold together, caring nothing for the rest of humanity, on the alert for attack or defense, bound. in fact, to a perpetual readiness for battle&quot; (p. 266). Such societies, according to Bergson, are rooted in a deep natural instinct comparable to thatÂˇ which rules in the beehive or the ant hill. The members cling together for self-protection against other groups, by which they would as isolated individuals be overcome. The morality in a closed society, as one might expect, puts prime value on what promotes the inner discipline and cohesion of the group; it is predominantly an ethic of conformity or repression. Bergson calls it a static, as contrasted with a dynamic, morality.

Opposed to this is the open society-one governed by love, aiming toward a larger future, tending to promote freedom and responsibility. The open society, since it does not live off opposition to any extemal power, is in principle capable of embracing the whole world. 17