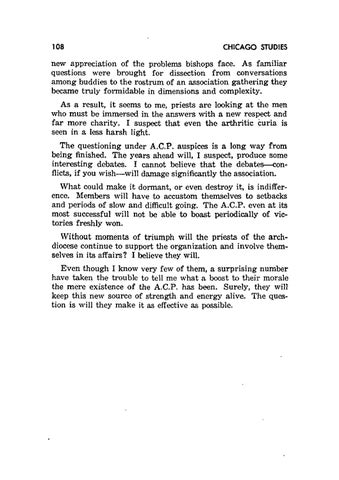 new appreciation of the problems bishops face. As familiar questions were brought for dissection from conversations among buddies to the rostrum of an association gathering they became truly formidable in dimensions and complexity. As a result, it seems to me, priests are looking at the men who must be immersed in the answers with a new respect and far more charity. I suspect that even the arthritic curia is seen in a less harsh light. The questioning under A.C.P. auspices is a long way from being finished. The years ahead will, I suspect, produce some interesting debates. I cannot believe that the debates-conflicts, if you wish-will damage significantly the association. What could make it dormant, or even destroy it, is indifference. Members will have to accustom themselves to setbacks and periods of slow and difficult going. The A.C.P. even at its most successful will not be able to boast periodically of victories freshly won. Without moments of triumph will the priests of the archdiocese continue to support the organization and involve themselves in its affairs? I believe they will. Even though I know very few of them, a surprising number have taken the trouble to tell me what a boost to their morale the mere existence of the A.C.P. has been. Surely, they will keep this new source of strength and energy alive. The question is will they make it as effective as possible.