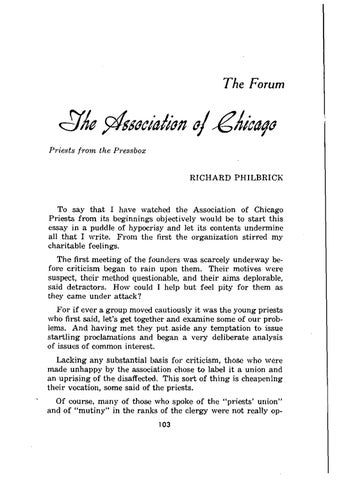 To say that I have watched the Association of Chicago Priests from its beginnings objectively would be to start this essay in a puddle of hypocrisy and let its contents undermine all that I write. From the first the organization stirred my charitable feelings. The first meeting of the founders was scarcely underway before criticism began to rain upon them. Their motives were suspect, their method questionable, and their aims deplorable, said detractors. How could I help but feel pity for them as they came under attack? For if ever a group moved cautiously it was the young priests who first said, let&#39;s get together and examine some of our problems. And having met they put. aside any temptation to issue startling proclamations and began a very deliberate analysis of issues of common interest. Lacking any substantial basis for criticism, those who were made unhappy by the association chose to label it a union and an uprising of the disaffected. This sort of thing is cheapening their vocation, some said of the priests. Of course, many of those who spoke of the &quot;priests&#39; union&quot; and of &quot;mutiny&quot; in the ranks of the clergy were not really op103