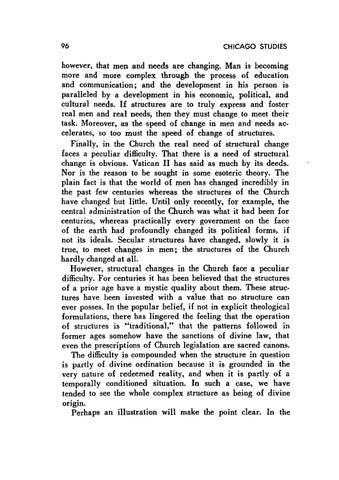 however, that men and needs are changing. Man is becoming more and more complex through the process of education and communication; and the development in his person is paralleled by a development in his economic, political, and cultural needs. If structures are to truly express and foster real men and real needs, then they must change to meet their task. Moreover, as the speed of change in men and needs acÂˇ celerates, so too must the speed of change of structures. Finally, in the Church the real need of structural change faces a peculiar difficulty. That there is a need of structural change is obvious. Vatican II has said as much by its deeds. Nor is the reason to be sought in some esoteric theory. The plain fact is that the world of men has changed incredibly in the past few centuries whereas the structures of the Church have changed but little. Until only recently, for example, the central administration of the Church was what it had been for centuries, whereas practically every government on the face of the earth bad profoundly changed its political forms, if not its ideals. Secular structures have changed, slowly it is true, to meet changes in men; the structures of the Church hardly changed at all. However, structural changes in the Church face a peculiar difficulty. For centuries it has been believed that the structures of a prior age have a mystic quality about them. These strucÂˇ lures have been invested with a value that no structure can ever posses. In the popular belief, if not in explicit theological formulations, there has lingered the feeling that the operation of structures is "traditional," that the patterns followed in former ages somehow have the sanctions of divine law, that even the prescriptions of Church legislation are sacred canons. The difficulty is compounded when the structure in question is partly of divine ordination because it is grounded in the very nature of redeemed reality, and when it is partly of a temporally conditioned situation. In such a case, we have tended to see the whole complex structure as being of divine ongm. Perhaps an illustration will make the point clear. In the