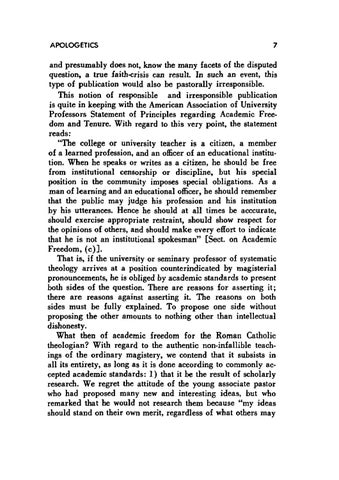 and presumably does not, know the many facets of the disputed question, a true faith-crisis can result. In such an event, this type of publication would also be pastorally irresponsible. This notion of responsible and irresponsible publication is quite in keeping with the American Association of University Professors Statement of Principles regarding Academic Free路 dom and Tenure. With regard to this very point, the statement reads: "The college or university teacher is a citizen, a member of a learned profession, and an officer of an educational institu路 tion. When he speaks or writes as a citizen, he should be free from institutional censorship or discipline, but his special position in the community imposes special obligations. As a man of learning and an educational officer, he should remember that the public may judge his profession and his institution by his utterances. Hence he should at all times be acccurate, should exercise appropriate restraint, should show respect for the opinions of others, and should make every effort to indicate that he is not an institutional spokesman" [Sect. on Academic Freedom, (c)]. That is, if the university or seminary professor of systematic theology arrives at a position counterindicated by magisterial pronouncements, he is obliged by academic standards to present both sides of the question. There are reasons for asserting it; there are reasons against asserting it. The reasons on both sides must be fully explained. To propose one side without proposing the other amounts to nothing other than intellectual dishonesty. What then of academic freedom for the Roman Catholic theologian? With regard to the authentic non-infallible teach路 ings of the ordinary magistery, we contend that it subsists in all its entirety, as long as it is done according to commonly ac路 cepted academic standards: I) that it be the result of scholarly research. We regret the attitude of the young associate pastor who had proposed many new and interesting ideas, hut who remarked that he would not research them because "my ideas should stand on their own merit, regardless of what others may