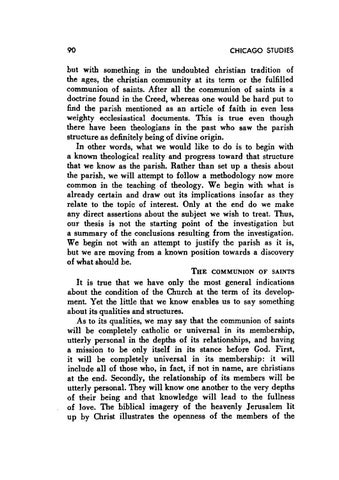 but with something in the undoubted christian tradition of the ages, the christian community at its term or the fulfilled communion of saints. After all the communion of saints is a doctrine found in the Creed, whereas one would be hard put to find the parish mentioned as an article of faith in even less weighty ecclesiastical documents. This is true even though there have been theologians in the past who saw the parish structure as definitely being of divine origin. In other words, what we would like to do is to begin with a known theological reality and progress toward that structure that we know as the parish. Rather than set up a thesis about the parish, we will attempt to follow a methodology now more common in the teaching of theology. We begin with what is already certain and draw out its implications insofar as they relate to the topic of interest. Only at the end do we make any direct assertions about the subject we wish to treat. Thus, our thesis is not the starting point of the investigation but a summary of the conclusions resulting from the investigation. We begin not with an attempt to justify the parish as it is, but we are moving from a known position towards a discovery of what should be. THE COMMUNION OF SAINTS

It is true that we have only the most general indications about the condition of the Church at the term of its development. Yet the little that we know enables us to say something about its qualities and structures. As to its qualities, we may say that the communion of saints will be completely catholic or universal in its membership, utterly personal in the depths of its relationships, and having a mission to be only itself in its stance before God. First, it will be completely universal in its membership: it will include all of those who, in fact, if not in name, are christians at the end. Secondly, the relationship of its members will be utterly personal. They will know one another to the very depths of their being and that knowledge will lead to the fullness of love. The biblical imagery of the heavenly Jerusalem lit up by Christ illustrates the openness of the members of the