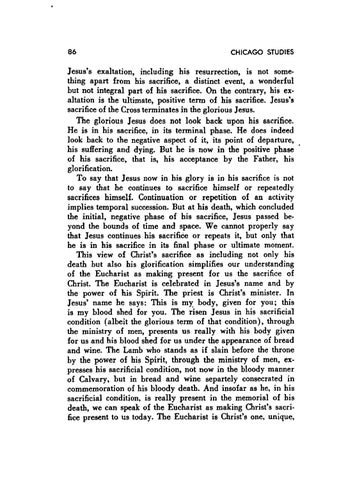 Jesus's exaltation, including his resurrection, is not something apart from his sacrifice, a distinct event, a wonderful but not integral part of his sacrifice. On the contrary, his exaltation is the ultimate, positive term of his sacrifice. Jesus's sacrifice of the Cross terminates in the glorious Jesus. The glorious Jesus does not look back upon his sacrifice. He is in his sacrifice, in its terminal phase. He does indeed look back to the negative aspect of it, its point of departure, his suffering and dying. But he is now in the positive phase of his sacrifice, that is, his acceptance by the Father, his glorification. To say that Jesus now in his glory is in his sacrifice is not to say that he continues to sacrifice himself or repeatedly sacrifices himself. Continuation or repetition of an activity implies temporal succession. But at his death, which concluded the initial, negative phase of his sacrifice, Jesus passed beyond the bounds of time and space. We cannot properly say that Jesus continues his sacrifice or repeats it, but only that he is in his sacrifice in its final phase or ultimate moment. This view of Christ's sacrifice as including not only his death but also his glorification simplifies our understanding of the Eucharist as making present for us the sacrifice of Christ. The Eucharist is celebrated in Jesus's name and by the power of his Spirit. The priest is Christ's minister. In Jesus' name he says: This is my body, given for you; this is my blood shed for you. The ~isen Jesus in his sacrificial condition (albeit the glorious term of that condition), through the ministry of men, presents us really with his body given for us and his blood shed for us under the appearance of bread and wine. The Lamb who stands as if slain before the throne by the power of his Spirit, through the ministry of men, expresses his sacrificial condition, not now in the bloody manner of Calvary, but in bread and wine separtely consecrated in commemoration of his bloody death. And insofar as he, in his sacrificial condition, is really present in the memorial of his death, we can speak of the Eucharist as making Christ's sacrifice present to us today. The Eucharist is Christ's one, unique,