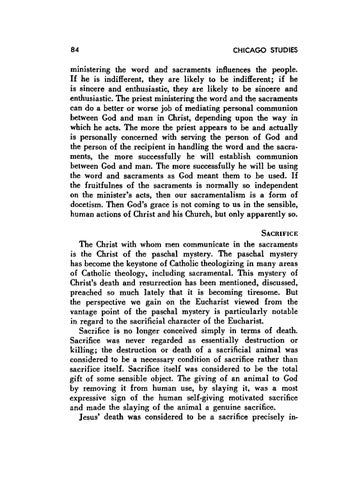 ministering the word and sacraments influences the people. If he is indifferent, they are likely to be indifferent; if he is sincere and enthusiastic, they are likely to be sincere and enthusiastic. The priest ministering the word and the sacraments can do a better or worse job of mediating personal communion between God and man in Christ, depending upon the way in which he acts. The more the priest appears to be and actually is personally concerned with serving the person of God and tbe person of the recipient in handling the word and the sacraments, the more successfully he will establish communion between God and man. The more successfully he will be using the word and sacraments as God meant them to be used. If the fruitfulnes of the sacraments is normally so independent on the minister's acts, then our sacramentalism is a form of docetism. Then God's grace is not coming to us in the sensible, human actions of Christ and his Church, but only apparently so. SACRIFICE

The Christ with whom men communicate in the sacraments is the Christ of the paschal mystery. The paschal mystery has become the keystone of Catholic theologizing in many areas of Catholic theology, including sacramental. This mystery of Christ's death and resurrection has been mentioned, discussed, preached so much lately that it is becoming tiresome. But the perspective we gain on the Eucharist viewed from the vantage point of the paschal mystery is particularly notable in regard to the sacrificial character of the Eucharist. Sacrifice is no longer conceived simply in terms of death. Sacrifice was never regarded as essentially destruction or killing; the destruction or death of a sacrificial animal was considered to be a necessary condition of sacrifice rather than sacrifice itself. Sacrifice itself was considered to be the total gift of some sensible object. The giving of an animal to God by removing it from human use, by slaying it, was a most expressive sign of the human self-giving motivated sacrifice and made the slaying of the animal a genuine sacrifice. Jesus' death was considered to be a sacrifice precisely in-