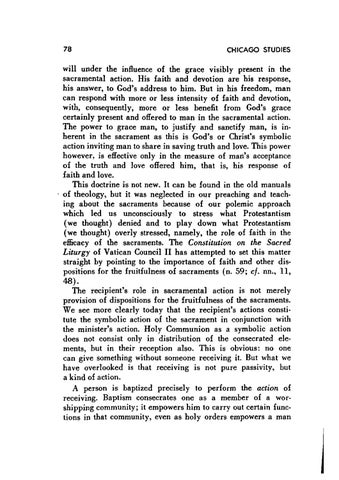 will under the influence of the grace visibly present in the sacramental action. His faith and devotion are his response, his answer, to God's address to him. But in his freedom, man can respond with more or less intensity of faith and devotion, with, consequently, more or less benefit from God's grace certainly present and offered to man in the sacramental action. The power to grace man, to justify and sanctify man, is inherent in the sacrament as this is God's or Christ's symbolic action inviting man to share in saving truth and love. This power however, is effective only in the measure of man's acceptance of the truth and love offered him, that is, his response of faith and love. This doctrine is not new. It can be found in the old manuals of theology, but it was neglected in our preaching and teaching about the sacraments because of our polemic approach which led us unconsciously to stress what Protestantism (we thought) denied and to play down what Protestantism (we thought) overly stressed, namely, the role of faith in the eflieacy of the sacraments. The Constitution on the Sacred Liturgy of Vatican Council II has attempted to set this matter straight by pointing to the importance of faith and other dispositions for the fruitfulness of sacraments (n. 59; cf. nn., 11, 48). The recipient's role in sacramental action is not merely provision of dispositions for the fruitfulness of the sacraments. We see more clearly today that the recipient's actions constitute the symbolic action of the sacrament in conjunction with the minister's action. Holy Communion as a symbolic action does not consist only in distribution of the consecrated elements, but in their reception also. This is obvious: no one can give something without someone receiving it. But what we have overlooked is that rece1vmg is not pure passivity, but a kind of action. A person is baptized precisely to perform the action of receiving. Baptism consecrates one as a member of a worshipping community; it empowers him to carry out certain functions in that community, even as holy orders empowers a man