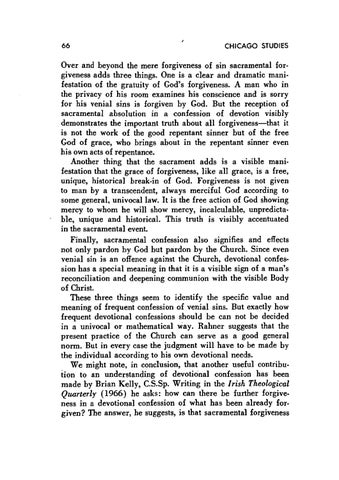 Over and beyond the mere forgiveness of sin sacramental forgiveness adds three things. One is a clear and dramatic manifestation of the gratuity of God's forgiveness. A man who in the privacy of his room examines his conscience and is sorry for his venial sins is forgiven by God. But the reception of sacramental absolution in a confession of devotion visibly demonstrates the important truth about all forgiveness-that it is not the work of the good repentant sinner but of the free God of grace, who brings about in the repentant sinner even his own acts of repentance. Another thing that the sacrament adds is a visible manifestation that the grace of forgiveness, like all grace, is a free, unique, historical break-in of God. Forgiveness is not given to man by a transcendent, always merciful God according to some general, univocal law. It is the free action of God showing mercy to whom he will show mercy, incalculable, unpredictable, unique and historical. This truth is visibly accentuated in the sacramental event. Finally, sacramental confession also signifies and effects not only pardon by God but pardon by the Church. Since even venial sin is an offence against the Church, devotional confession has a special meaning in that it is a visible sign of a man's reconciliation and deepening communion with the visible Body of Christ. These three things seem to identify the specific value and meaning of frequent confession of venial sins. But exactly how frequent devotional confessions should be can not be decided in a univocal or mathematical way. Rahner suggests that the present practice of the Church can serve as a good general norm. But in every case the judgment will have to be made by the individual according to his own devotional needs. We might note, in conclusion, that another useful contribuiion to an understanding of devotional confession has been made by Brian Kelly, C.S.Sp. Writing in the Irish Theological Quarterly (1966) he asks: how can there be further forgiveness in a devotional confession of what has been already forgiven? The answer, he suggests, is that sacramental forgiveness