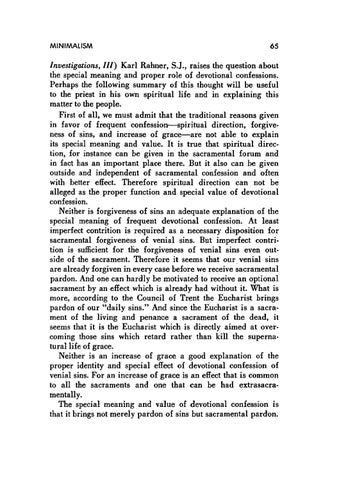 Investigations, Ill) Karl Rahner, S.J., raises the question about the special meaning and proper role of devotional confessions. Perhaps the following summary of this thought will be useful to the priest in his own spiritual life and in explaining this matter to the people. First of all, we must admit that the traditional reasons given in favor of frequent confession-spiritual direction, forgive· ness of sins, and increase of grace-are not able to explain its special meaning and value. It is true that spiritual direc· tion, for instance can be given in the sacramental forum and in fact has an important place there. But it also can be given outside and independent of sacramental confession and often with better effect. Therefore spiritual direction can not be alleged as the proper function and special value of devotional confession. Neither is forgiveness of sins an adequate explanation of the special meaning of frequent devotional confession. At least imperfect contrition is required as a necessary disposition for sacramental forgiveness of venial sins. But imperfect contri· tion is sufficient for tlie forgiveness of venial sins even out· side of the sacrament. Therefore it seems that our venial sins are already forgiven in every case before we receive sacramental pardon. And one can hardly be motivated to receive an optional sacrament by an effect which is already had without it. What is more, according to the Council of Trent the Eucharist brings pardon of our "daily sins." And since the Eucharist is a sacra· ment of the living and penance a sacrament of the dead, it seems that it is the Eucharist which is directly aimed at over· coming those sins which retard rather than kill the supema· turallife of grace. Neither is an increase of grace a good explanation of the proper identity and special effect of devotional confession of venial sins. For an increase of grace is an effect that is common to all the sacraments and one that can be had extrasacra· mentally. The special meaning and value of devotional confession is that it brings not merely pardon of sins but sacramental pardon.