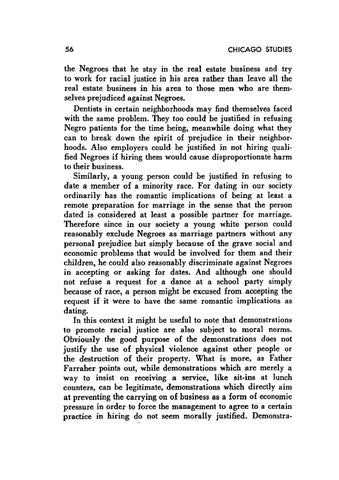 the Negroes that he stay in the real estate business and try to work for racial justice in his area rather than leave all the real estate business in his area to those men who are themselves prejudiced against Negroes. Dentists in certain neighborhoods may find themselves faced with the same problem. They too could be justified in refusing Negro patients for the time being, meanwhile doing what they can to break down the spirit of prejudice in their neighborhoods. Also employers could be justified in not hiring qualified Negroes if hiring them would cause disproportionate harm to their business. Similarly, a young person could be justified in refusing to date a member of a minority race. For dating in our society ordinarily has the romantic implications of being at least a remote preparation for marriage in the sense that the person dated is considered at least a possible partner for marriage. Therefore since in our society a young white person could reasonably exclude Negroes as marriage partners without any personal prejudice but simply because of the grave social and economic problems that would be involved for them and their children, he could also reasonably discriminate against Negroes in accepting or asking for dates. And although one should not refuse a request for a dance at a school party simply because of race, a person might be excused from accepting the request if it were to have the same romantic implications as dating. In this context it might be useful to note that demonstrations to promote racial justice are also subject to moral norms. Obviously the good purpose of the demonstrations does not justify the use of physical violence against other people or the destruction of their property. What is more, as Father Farraher points out, while demonstrations which are merely a way to insist on receiving a service, like sit-ins at lunch counters, can be legitimate, demonstrations which directly aim at preventing the carrying on of business as a form of economic pressure in order to force the management to agree to a certain practice in hiring do not seem morally justified. Demonstra-