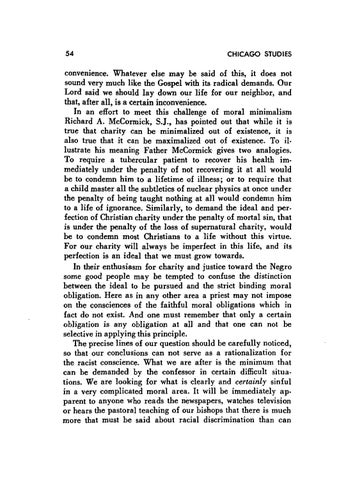 convenience. Whatever else may be said of this, it does not sound very much like the Gospel with its radical demands. Our Lord said we should lay down our life for our neighbor, and that, after all, is a certain inconvenience. In an effort to meet this challenge of moral minimalism Richard A. McCormick, S.J., has pointed out that while it is true that charity can be minimalized out of existence, it is also true that it can be maximalized out of existence. To illustrate his meaning Father McCormick gives two analogies. To require a tubercular patient to recover his health immediately under the penalty of not recovering it at all would be to condemn him to a lifetime of illness; or to require that a child master all the subtleties of nuclear physics at once under the penalty of being taught nothing at all would condemn him to a life of ignorance. Similarly, to demand the ideal and perfection of Christian charity under the penalty of mortal sin, that is under the penalty of the loss of supernatural charity, would be to condemn most Christians to a life without this virtue. For our charity will always be imperfect in this life, and its perfection is an ideal that we must grow towards. In their enthusiasm for charity and justice toward the Negro some good people may be tempted to confuse the distinction between the ideal to be pursued and the strict binding moral obligation. Here as in any other area a priest may not impose on the consciences of the faithful moral obligations which in fact do not exist. And one must remember that only a certain obligation is any obligation at all and that one can not be selective in applying this principle. The precise lines of our question should be carefully noticed, so that our conclusions can not serve as a rationalization for the racist conscience. What we are after is the minimum that can be demanded by the confessor in certain difficult situations. We are looking for what is clearly and certainly sinful in a very complicated moral area. It will be immediately apparent to anyone who reads the newspapers, watches television or hears the pastoral teaching of our bishops that there is much more that must be said about racial discrimination than can