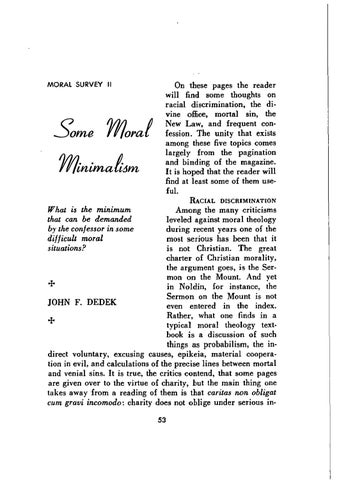 On these pages the reader will find some thoughts on racial discrimination, the divine office, mortal sin, the New Law, and frequent confession. The unity that exists among these five topics comes largely from the pagination and binding of the magazine. It is hoped that the reader will find at least some of them usefuL RAciAL DISCRIMINATION

What is the mznzmum that can be demanded by the confessor in some difficult moral situations?

Among the many criticisms leveled against moral theology during recent years one of the most serious has been that it is not Christian. The great charter of Christian morality, the argument goes, is the Sermon on the Mount. And yet + in N oldin, for instance, the Sermon on the Mount is not JOHN F. DEDEK even entered in the index. Rather, what one finds in a + typical moral theology textbook is a discussion of such things as probabilism, the indirect voluntary, excusing causes, epikeia, material cooperation in evil, and calculations of the precise lines between mortal and venial sins. It is true, the critics contend, that some pages are given over to the virtue of charity, but the main thing one takes away from a reading of them is that caritas non obligat cum gravi incomodo: charity does not oblige under serious in53