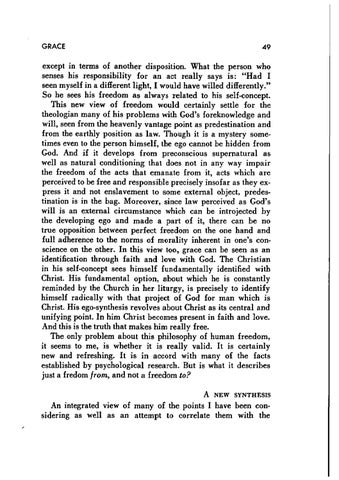 except in terms of another disposition. What the person who senses his responsibility for an act really says is: "Had I seen myself in a different light, I would have willed differently." So he sees his freedom as always related to his self-concept. This new view of freedom would certainly settle for the theologian many of his problems with God's foreknowledge and will, seen from the heavenly vantage point as predestination and from the earthly position as law. Though it is a mystery sometimes even to the person himself, tbe ego cannot be hidden from God. And if it develops from preconscious supernatural as well as natural conditioning that does not in any way impair the freedom of the acts that emanate from it, acts which are perceived to be free and responsible precisely insofar as they express it and not enslavement to some external object, predestination is in the bag. Moreover, since law perceived as God's will is an external circumstance which can be introjected by the developing ego and made a part of it, there can be no true opposition between perfect freedom on the one hand and full adherence to the norms of morality inherent in one's conscience on the other. In this view too, grace can be seen as an identification through faith and love with God. The Christian in his self-concept sees himself fundamentally identified with Christ. His fundamental option, about which he is constantly reminded by the Church in her liturgy, is precisely to identify himself radically with that project of God for man which is Christ. His ego-synthesis revolves about Christ as its central and unifying point. In him Ch1Âˇist becomes present in faith and love. And this is the truth that makes him really free. The only problem about this philosophy of human freedom, it seems to me, is whether it is really valid. It is certainly new and refreshing. It is in accord with many of the facts established by psychological research. But is what it describes just a fredom from, and not a freedom to?